Our most exotically floral Eddie's Patch bottling thus far, this new vintage could be our favorite to date and should develop beautifully in bottle. Stylistically most similar to its equally bold 2005 predecessor, rather than warmer earlier vintages, the wine exudes richness and power, but is also aromatically tense, pungently peppery and offers incredible clarity of flavor. For the first time, we chose to include some whole non-destemmed clusters in the fermentation, an addition that heightened the range of earthy olive and cured-meat notes, yet also brought an intriguing textural and structural element to the mix. While the steeply terraced low-vigor hillside vines set a significant crop in this naturally abundant year, successive thinning passes ensured the wine lacks no measure of concentration or flavor intensity. The fruit notes themselves are also somewhat more primary than in the past with masses of gravelly cassis and small dark-berry fruits. The solid tannins, indicative of the site's remarkable intrinsic power, confer a penetrating density to the wine and ensure that an aging potential of a decade-plus is a strong bet. If you are tempted to open this wine while young, you should certainly decant for at least a couple of hours, as its full potential lies somewhere in the 2010+ time frame.

Purple/black color. Unmistakable aromatics of floral violets, blackberry and cassis with a strong peppery streak and camphor side notes. Intense layered palate that maintains focus and precision in the face of wave upon wave of ripe dark primary fruit. Complexity builds on the back end with bittersweet chocolate, grilled spices and brooding roasted meat notes. Tannins are full, rich and dense. Cellar for at least two years and decant for a minimum of two hours.

A Study of Our Vineyards 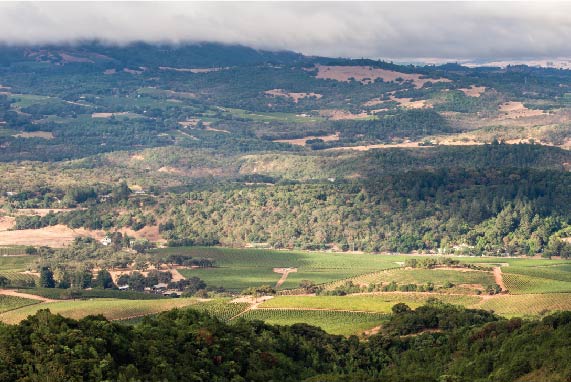